skip to main | skip to sidebar

Dark & Gritty Tutorial & What Came Out of it

Hi!
I've been pretty busy lately with storyboard/comp advertising work so this latest promotional piece was done in a few sessions over the last week or so. It's a bit of a Darker, Grittier direction for me. I owe some of this new experimentation to a great tutorial I soaked up this week from the Massive Black collection. Brad Rigney's "Hostile Takeover" tutorial is, unfortunately, not online anymore. 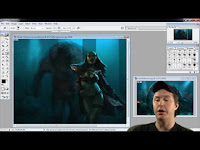 As well as being a phenomenal self taught artist and a self described "hack" at the same time, he was entertaining and insightful for 5 hours straight. The art he produced in the tutorial took him in the neighborhood of 100 hours, which to me, coming from a sketch art background, seems a bit staggering. The results are amazing and his techniques are unconventional to say the least. Anyway, it's well worth checking out. I'll likely try some others from Massive Black soon. I can't wait to see what it stirs up in me next time.
Anytime I'm inspired to try my hand at something, I inevitably come at it from the angles I know best, mainly advertising art. 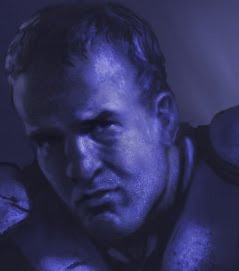 I'd say the main takeaways from this tutorial which I tried to apply in my piece was the use of large textured brushes to create some dark noise from which to begin pulling light features out of. Brad uses the Dodge tool extensively which, to me, was worth the price of admission. I always considered the Dodge tool to be a photographic editing tool. But what it does differently than a brush in Color Dodge mode is that it brightens the pixels more selectively, leaving the darkest pixels under the tool to be effected a little less than brighter ones. The effect can build highlights pretty quickly using the colors which have already been established in the dark underpainting. Brad also uses the smudge tool artistically alternating between smearing areas to create "micro gradients" and pushing small areas to "tighten" them. I tried to use the Smudge tool in places on my project and found it useful for me for moving groups of pixels where I was happy with the values, but the placement needed tweaking (mostly when trying to achieve the likeness comparing it to my photo). Brad uses Smudge much more extensively than I managed to. It felt a little foreign using it that way. But it's fun to play with.

I thought I'd post the reference also, for anyone interested
I enjoyed working in such a dark register (much easier to do in the dark of the night). It was fun applying some of the techniques I learned while they were still fresh, and of course I felt compelled to put the image to "work", hence the Gatorade. You can teach an old dog some new tricks, but he still knows what he knows I guess :)

I'd love to hear any comments or critiques.. the more eyeballs the better! 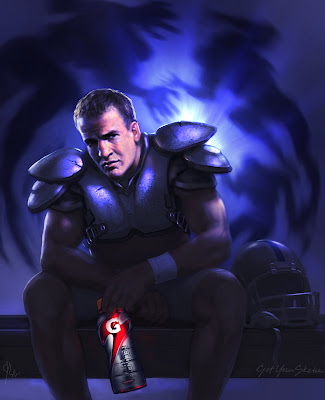 Super job! Great atmosphere on this.

your work is amazing, very good.

25+ years in the trenches of the NYC advertising illustration business bringing your visual ideas to life!
(with cheesy tag lines like that running through my head the entire time :)